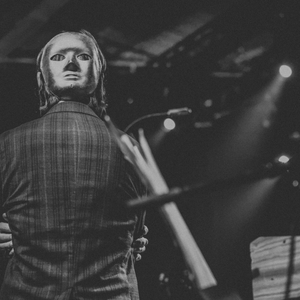 Mak Murtić is a composer and saxophonist from Zagreb, Croatia. His initial interest in music started while performing in various bands in mid to late 2000s.

In 2010 Murtić moved to London to pursue his studies at Middlesex University and to start his own alternative jazz orchestra Mimika which has since released three concept albums about various sociopolitical topics influenced by Balkan pagan beliefs and folk music. Apart from Mimika Orchestra, Murtic has worked with various London based ensembles and groups ranging from jazz, classical, experimental and club music.a

In 2013 Murtic was accepted into Sound and Music’s “Adopt a Composer” programme working on a piece for the Clapham Community Choir. In the meantime he recorded an album with the Croatian Radio Television Jazz Orchestra, wrote for the Septet Ad Libitum of the Zagreb Symphony. Recently Murtic’s pieces were performed by students at the Purcell School, by White Flower ensemble, Tom Atherton and other musicians. He wrote music for a few short films as well as arrangements for various ensembles and an immersive theatre piece.

In the recent years, Murtic has been centred in Zagreb, Croatia and has written music for various films, theatres and ensembles. (notably “Granice” commissioned by the Zagreb Dance Centre and “Jedna od Nas”, a documentary by Duro Gavran) He performed with various acclaimed bands such as Porto Morto, On and JR August and guested in many others. He has participated in various one off projects and collaborative projects, including One Beat Balkans in 2019, Croatian Improvises Orchestra twice in 2019, orchestral project with Billy Martin (Medeski, Martin and Wood), arrangements for Darko Rundek and the Croatian Radiotelevision Jazz Orchestra, piece for Sinkovic / Mercep percussion duo for the Zagreb Musical Biennale 2019 and others. Murtic currently actively performs with bands Antenat , Mimika Orchestra and Truth ≠ Tribe. In 2020 he started Rika Muzika label with Sara Al Hamad which released Truth ≠ Tribe's second album "Live at Vinyl Factory" and most recently a compilation album made up of Zagreb's alternative music scene spanning the last 20 years "ZGB 2020" intended to help the reconstruction of damaged arts and cultural spaces as well as artists studios after the Zagreb Earthquake of March 2020. Murtic is a fascilitator and collaborator in the educational and artivistic programme OneBeat Balkans since 2019. In 2020 Murtic wrote the music to the film "Inkorničata" which premiered in November as part of the European Capital of Culture Rijeka 2020. With his orchestra Mimika he performed as part of EPK2020, Groznjan Jazz is Back Festival and in the Frankopan castle in Krk. In 2021, he wrote music for the Zagreb Biennale for Ensemble Illyrica, music to the film "Škoj ili ne?", music to the Murtic100 project commemorating the late painter of Yugoslav abstract expressionism Edo Murtic, the music for the "Scena Amadeo" commision for Ensemble Illyrica entitled Telos and did a residency in Canada (Balkanada) where he wrote two pieces for the Tour de Bras ensemble which were performed in Rimouski, Quebec. He is currently writing a number of short films and the new project for Mimika Orchestra entitled "Altur Mur".

Conversations in a shopping mall

One of Us main theme

24
0 / 0
We use cookies to enhance your experience. Dismiss this message or find out more here