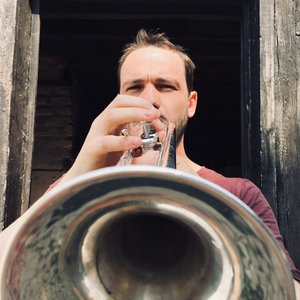 Valentin François is a versatile trumpet player from France, active throughout Europe. He received his first trumpet lesson with the age of 7 at the Conservatoire à Rayonnement Regional in Metz (France). After graduating from Highschool in 2008, he began Law Studies in Strasbourg’s University, before finally deciding to devote himself to music in 2010. After graduating from Strasbourg’s conservatoire in 2012, he studied at the Hochschule für Musik in Luzern with Prof. Philippe Litzler (principal trumpet of the Tonhalle Zürich Orchester). There, he developed himself as a multi-faceted trumpet player, interested in all kinds of music through both his Bachelor and Master’s study, eventually graduating in 2017. He plays regularly with different ensembles, often performing chamber music on either baroque or modern instruments. During his Master’s specialization in Luzern (advised by Marco Blaauw) he developed a strong affinity for playing contemporary music. In the last few years, he participated in the Lucerne Festival Academy, and also in the Jeune Orchestre de l’Abbaye aux Dames, with historical instruments, or the Schweizer Jugend Sinfonisches Orchester under the direction of renowned conductors, Philippe Herreweghe or Marc Minkowski among others. He has also played with the Orchestre Philharmonique de Strasbourg, the Collegium Musicum Basel, or the Grand Ensemble de Cuivres d’Alsace. He now studies with Marco Blaauw in the Master aus LICHT Programm in the Royal Conservatoire Den Haag, Netherlands, where he is specializing in the music of Karlheinz Stockhausen.