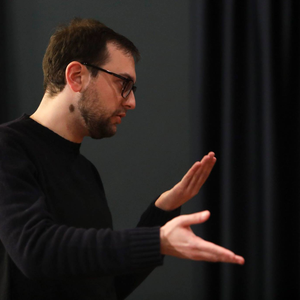 Born in Naples in 1989, he has studied Composition with G. Panariello and Piano with E. Massa. After a Bachelor’s degree in Physics at University of Pisa with a thesis on Musical acoustics, he studies Electronic Music at Conservatory “S. Pietro a Majella” of Naples with A. Di Scipio and E. Martusciello (Bachelor’s Degree) and then at Conservatory “S. Cecilia” of Rome with M. Lupone and N. Bernardini (Master’s Degree).
He attended master classes and courses with a.o. F. Filidei, M. Lanza, R. Cendo, O. Bianchi, C. Czernowin, S. Steen-Andersen, Y. Maresz, S. Movio.
His music has been performed by Divertimento Ensemble, Ensemble SuonoGiallo, mdi ensemble, Neue Vocalsolisten Stuttgart, Ensemble Mise-En, Ensemble United Instruments of Lucilin, etc. and in festivals such as “Mise-En Music Festival” in New York, “Rondò” and “Sound of Wander” in Milano, “Festival delle Nazioni” in Citta di Castello, “Casa del Quartetto - Fondazione I Teatri” in Reggio Emilia, “Risuonanze” in Udine, etc.
He has also worked in sound installations field with “Fewy”, exposed in the Sol LeWitt Hall of the Museo Madre (NA) during the project Electromadre, and “Studio in tre fasi”, a site-specific sound installation at the Goethe Institut in Rome during ArteScienza Festival 2017.
In 2017 he wins the Divertimento Ensemble’s “Concorso di Composizione AFAM” for young composers.
He is currently a PhD student in Sound and Music Computing at KTH Royal Institute of Technology in Stockholm, focusing on the musical adaptive systems and the problem of emergence and style.