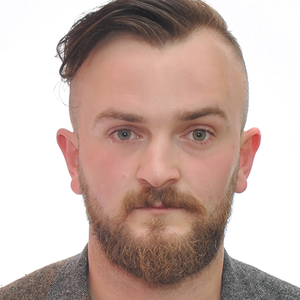 Born in Shkoder in 1994. The beginnings of his musical life were in the piano during the age of 6-17 years at the artistic lyceum “Prenkë Jakova” in Shkoder. In the year 2012 he starts studying for a Bachelor’s Degree in the University of Arts in Tirana under the directon of Professor Vasil S. Tole.
In 2015 Jetmir continues his studies for a Master’s Degree under the directon of Professor Vasil S. Tole and graduates in 2018. In this time he worked on several projects during his university years and participated in competitions also. In December 2018 he won the special prize for young composer on a competition that was organized from the Ministry of Culture which was held in Tirana. Jetmir uses a specific writing language which contains a complexity of different modal scales, in which he keeps the authenticity of his country’s folklore music, combined with classical harmony
Specifically talking the old traditional songs from his hometown (Shkoder) were the genesis of his work. Differently they are known as “Jare” in the terminology of music. Based on this are 2 of his works, them being Theme with Variations for piano.
Another work of his is a choral “Tu qajë Nëna me radhe” which is composed on a pentatonic harmony that is authentic to the old songs of south Albania in which they contain different harmonical structures compared to “Jare”. The fundamental of these works is the “isopolyphoni” which is also a very authentic musical language. Jetmir also has a Suite for orchestra which is based in three different local harmonies which represents the geographical devidement of the nation also.
The Ballet “Ballkan Express” out of which the libretto is according to the same book with the same title written from the author Stefan Çapaliku has a diverse range of distinguished harmonically and rhythmically textures. The work contains 2 Acts and 4 Tabloids. The Uvertura based on Old folk songs from the region of Malesia e Dukagjinit has polyphonic techniques.
In 2019 Jetmir attented the Irish Summer School where he was presented with a trio of piano, clarinet and soprano titled “Muji, Halili and Zana”. The libretto of this work comes from Albanian epic songs, specifically from Albanian Songs of the Frontier Warriors.

Muji, Halili and the Faeries

Trio, for flute, violin and piano by Fernando Villanueva