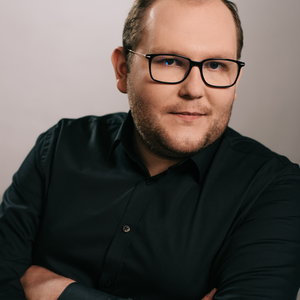 Tomasz Sowa obtained a master’s degree with honours in the Krzysztof Penderecki Academy of Music in Kraków, having studied with prof. Andrzej Godek, and has been pursuing his doctoral studies there since, under Janusz Antonik, Ph.D.

He was awarded several dozen prizes in musical competitions held both in Poland and abroad, including Germany, Austria, Serbia, Italy, and South Africa: besides first prize, gold medal, and audience award at the Junior Delphic Games in Johannesburg (2011), he won first prizes at the National Clarinet Festival in Krosno (2009, 2012) and in the International Music Competition in London (2015), among other accolades. Apart from that he earned two particular distinctions: the Gottfried von Ainem Award (2016) and the Viktor Kalabis Award during the isa FESTIVAL in Austria (2017).

He has given masterclasses to budding clarinettists in Poland, Thailand, Armenia, and Belgium. His numerous festival performances include the isa FESTIVAL in Wien, the Aurora Music Festival in Stockholm, the Schleswig-Holstein Musik Festival, South Africa’s National Arts Festival, Shanghai’s MISA Festival, Dubai’s Expo Festival, the European Festival of Jan Kiepura in Krynica-Zdrój, the international Adam Didur Festival in Sanok, the Summer Music Festival ‘Wawel at Dusk’ in Kraków, the International Folk Festival ‘World Wide’ in Puławy, and the Amber Road Festival in Kalisz.

With chamber music occupying a special place in his professional life, the clarinettist formed the Cracow Golden Quintet. Awarded several prizes in prestigious competitions, the group earned many enthusiastic reviews, performing in Poland—in the Krzysztof Penderecki European Centre for Music or in the Kraków Philharmonic, for instance—as well as in the world—in such celebrated venues as Accademia Nazionale di Santa Cecilia in Rome or the Aram Khachatryan Hall in Yerevan.

He has received grants through the ‘Młoda Polska’ (Young Poland) state-funded programme, from Poland’s Ministry of Culture and National Heritage (three times), from the J&S Pro Bono Poloniae foundation, from the Sanok Poviat Staroste, the Podkarpacka Foundation for the Development of Culture, and Warsaw’s Centrum Edukacji Artystycznej.