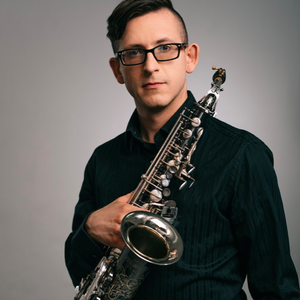 Born in 1990 in Cieszyn. In 2009 he graduated from the first- and second-level Ignacy Jan Paderewski State Music School in Cieszyn, in the saxophone class led by Tomasz Gmyrek. In 2014, graduating with honours, he earned a master degree at the Academy of Music in Kraków, in the saxophone class of Prof. Andrzej Rzymkowski. In 2015 he completed extraordinary studies under Univ.-Prof. Lars Mlekusch, at the Konservatorium Wien Privatuniversität. In 2018 he obtained the title of Doctor of Musical Arts at the Academy of Music in Kraków.

He has taken part in many saxophone masterclasses: with Arno Bornkamp, Nobuya Sugawa, Lars Mlekusch, Günter Priesner, Vincent David, Massimo Mazzoni, and Claus Olesen, among others. He is involved in numerous artistic projects, performing solo, in chamber ensembles, in orchestras, and as a soloist with orchestra both in Poland and abroad (Germany, Austria, Czechia, Hungary, Slovenia).