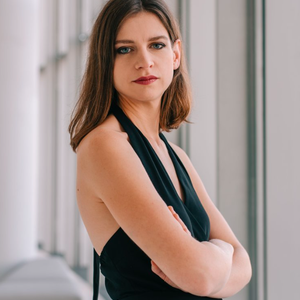 Chamber musician and performer of contemporary music. She graduated with honours from the Academy of Music in Kraków, having studied in the class led by Prof. Kaja Danczowska. She perfected her skills in masterclasses given by Jan Stanienda, Grigori Zhyslin, and Krzysztof Jakowicz. In 2014–2017 she studied chamber music with the Antarja Quartet at the University of Music and Performing Arts Vienna, under Prof. Johannes Meissl and Vida Vujic.

She gives concerts in Poland and abroad. Her two passions are chamber music and performing new music. Since 2009 she has been forming Antarja Quartet, with whom she has performed at international festivals: in Italy, Germany, Austria, Denmark, Serbia, Macedonia, Slovenia, and Iran, among other countries. Together with the quartet she has taken masterclasses from Krzysztof Penderecki, Melos Quartet, Fine Arts Quartet, Apollon Musagète Quartett, Altenberg Trio, Shanghai Quartet, Belcea Quartet, and Quatuor Diotima. In April 2016 the ensemble won the first prize in the 3rd Chamber Tournament in Bydgoszcz, which resulted in an album featuring works by Felix Mendelssohn and Krzysztof Penderecki.

Her fascination with contemporary music began in 2013, upon joining the German-Polish project European Workshop for Contemporary Music, assembled for the 56th International Festival of Contemporary Music ‘Warsaw Autumn’. That fruitful cooperation translated into her being invited to the EWCM twice more: in 2014 she participated in workshops during the 47th International Summer Courses for New Music in Darmstadt, and in the following year she took part in courses in Cologne. Over that period, she developed her skills working with members of Kwartludium, Ensemble Garage, and Ensemble Modern. Since 2014 she has been a member of Spółdzielnia Muzyczna contemporary ensemble, with whom she has performed at the most important international festivals in Poland, such as the Warsaw Autumn, Sacrum Profanum, MUSICA MODERNA, the Festival of Traditional and Avant-garde Music KODY, the Audio Art Festival, ELEMENTI, NeoArte, and opera rara. In 2018, with the ensemble, she participated in courses run by ensemble recherche as part of Ensemble-Akademie Freiburg.

In 2019, together with the pianist Martyna Zakrzewska, she founded Duo Zakrzewska/Mglej, concerned above all with 20th- and 21st-century music. In October 2019 they won the second prize at the 23rd International Chamber Music Competition Luigi Nono.

In 2021 she received the ‘Młoda Polska’ (Young Poland) scholarship and the Creative Scholarship of the City of Krakow. She is currently tied to the orchestra of the Karol Szymanowski Philharmonic in Krakow.