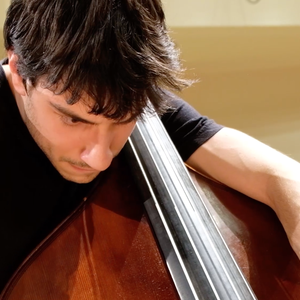 Pietro Elia Barcellona is an Italian contrabassist, composer and improviser currently based in the Netherlands, where he is active in the fields of experimental music involving both improvising and performing written material.
In the field of new music, Pietro has premiered works of composers such as Frank Denyer, collaborating with Amsterdam-based Ensemble Scordatura, and Robin Engel as first double bass of the Junger Künstler Bayreuth Orchestra; as well as performing in festivals such as Gaudeamus, Amsterdam Viola Festival and Doek Festival. Pietro has also played as a soloist for Sebastian Gramss’ BasseMasse Sizilien Orchestra as part of Curva Minore in Palermo. Pietro has studied with teachers such Dario Calderone and Ernst Glerum and his repertoire includes composers such as Giacinto Scelsi, Stefano Scodanibbio, Salvatore Sciarrino. Pietro has also received lessons in contemporary chamber music from Helen Hulst and Nick Sterling, members of Nieuw Amsterdams Peil.
As an improviser Pietro has performed with numerous formations. He is co-leader of Fade in Trio, an ensemble focused on exploring ways of mixing Carnatic rhythms, free improvisation and unconventional techniques. The trio was among the winners of “Tomorrow’s Jazz Prize” in Venice in 2021. Pietro is also a member of Moving Air Ensemble, an immersive project involving a kinetic sound installation combined with an acoustic ensemble. Furthermore, he is a member of Stab Freeze Collective (a sound painting ensemble), All Strings (an improvised music series of only string instruments players).
As a composer Pietro is interested in exploring the boundaries of composition and improvisation as well as the relationship between musical gesture and rhythm. Pietro is founder and co-leader of Ensemble Mellonta, a collective devoted to the performance of contemporary music and new compositions for which he also composes.