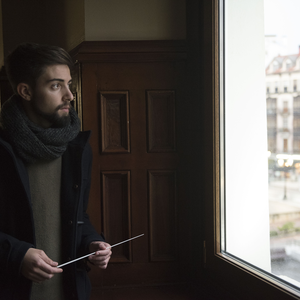 He started his Conducting degree in Spain, at the Conservatoire of Music of Oviedo ‘’Eduardo Martínez Torner’’.

Since then, he was selected for a Specialization degree in 2017 at the Atlantic Coast Interational Conducting Academy in Portugal, with international orchestral conductors as Luis Miguel Clemente (Portugal), Colin Metters (Germany), John Traill (conducting teacher at Oxford University) or Roberto Fiore (Italia).

He has conducted, among others, the Youth Orchestra of Bilbao (ES), the Atlantic Coast Orchestra (PT), Marinierskapel der Koninklijke Marine (NL) or the Codarts String Orchestra (NL) with Lawrence Power as soloist within the International Viola Congress 2018.

He won an internship place in 2017 as Assistant Conductor in the Opera House of Oviedo, having the opportunity to work with some of the best soloists worlwide currently, as Jorge de León, Carlos Álvarez and Ainhoa Arteta in ‘’Andrea Chénier’’, or Edward Nelson, Anne- Catherine Gillet and Paul Gay in ‘’Pelléas et Melisande’’.

Graduate in Orchestral Conducting at Codarts University for the Arts (Rotterdam, Netherlands) with the teachers Hans Leenders and Wiecher Mandemaker, among other guest teachers as Conrad van Alphen and Sander Teepen.