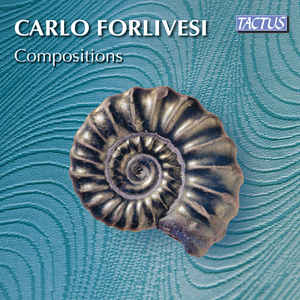 Considered one of the most eclectic and original artists of his generation, Carlo Forlivesi (b. 1971, Faenza) is a worldwide active composer, organist, researcher, writer and educator.

He began studying music at the age of six and entered the State Conservatory of Bologna at the age of fifteen being the youngest composition student of the school. He later received the Bologna Academy and Conservatory Prize of the “Fondazione Zucchelli” for talented young artists. Forlivesi also received the Milan Conservatory Artistic Committee Commission, awarded to the most distinguished student in composition, and was the recipient of the Centre Acanthes Summer Course Bursary.

Forlivesi holds degrees from the State Conservatory Giovan Battista Martini of Bologna (1986-1994), and the State Conservatory Giuseppe Verdi of Milan (1995-1996). Afterward, he was selected for both the Specialization Course in Composition at the National Academy of Santa Cecilia of Rome (1996-1998) and the One-year Composition and Computer Music Course at IRCAM (1997-1998), where he received a comprehensive education in the field of electronic music and contemporary music.

In his 30s he has gained international recognition through his success in being awarded a number of honours, including the Hamburger Klangwerktage Award (2006), the Kyoto Rohm Music Foundation Award (2004 and 2008), the Huub Kerstens Prize (special award for choral music of the Gaudeamus Music Week, Amsterdam 2003), the Yamaha Music Foundation Award (Tokyo 2003), the Europe Culture 2000 (2003), the Residences Virtuelles Competition (Montreal 2003), the DTKV Saxonia Prize (Leipzig 2002), twice the Italian Young Artists Association Award (Turin 1999 and 2000), and several mentions at international contests including the Hultgren Cello Solo Biennial (Atlanta 2005), the Poznan Art Centre Composition Competition (2005), the Gaudeamus Music Week (Amsterdam 2002, 2003, 2004), and the Takemitsu Award (Tokyo 2000).

His music has been performed all around the world in major venues such as the Tokyo Opera City, the Theatre Beurs van Berlage Yakult Hall of Amsterdam, the Opéra National de Lyon, IRCAM, GRAME, Radio-France, the Finnish National Theatre, the Puccini Hall of Milan, the Ljubljana Festival, the Dresden Festspielhaus, the Berlin BKA, the GMEM of Marseille, the Iwaki Auditorium of Melbourne, the Kyoto Art Center, the Kyoto Ritsumeikan Concert Hall, and several other venues in Paris, Avignon, Berlin, Leipzig, Hamburg, Vienna, Salzburg, Montreal, Atlanta, Chicago, Columbus, Los Angeles, Adelaide.

Forlivesi has been appointed artist-in-residence of the Akiyoshidai International Art Village (Japan) where he composed and produced the multimedia dance music work KAYA. The production was performed at the AIAV Concert Hall and highlighted by the Japanese television.

Furthermore he was selected to participate in the Ensemble Aleph’s 3rd International Forum of Young Composers (France).

Artists to have staged his music include Noh dancer Atsuko Nagamune at Akiyoshidai Concert Hall, Butoh dancer Aki Suzuki at Time of Music (Viitasaari, Finland) and the Finnish National Theatre, Butoh dancer Bunsho Nishioeda at the Zui-Shin-In Temple in Kyoto, Jiuta-mai dancer Sayuri Unou at the Ravenna Festival, the Emilia-Romagna Festival, Elektronische Nacht (Stuttgart), the Northern Cultural Forum (Sapporo), Marjori Ward Marshall Dance Centre of Chicago, the CCJP of Paris and the André Malraux Hall of Lyon, and the Jiuta-mai master Ufo Furusawa (head of the Furusawa school) at the Italian Cultural Institutes in Tokyo (Agnelli Hall) and Kyoto.

Carlo Forlivesi is known as an active scholar for his dynamic research activity ranging from traditional and ethnic music to new technologies and comparative studies, which brought him to work in institutions such as the Danish Institute of Electroacoustic Music, the Tokyo College of Music, the Sapporo University, and the Northwestern University of Chicago. He received academic grants and awards from a wide variety of international institutions including the governmental cultural programs of Italy (Italian Ministry of Foreign Affairs, 1999-2000), Denmark (Danish Rectors' Conference, 2000-2001), Japan (Monbukagakusho, Japanese Ministry of Culture, Science and Education, 2002-2004), and the USA (the Fulbright Commission, Visiting Scholar 2005-2006).

In the past 20 years Forlivesi has conducted extensive researches in the field of traditional Japanese instruments (biwa, koto and shakuhachi) and dance (nihon-buyo, jiuta-mai, kyo-mai). An expert of Japanese traditional music, he is regularly invited to present works and papers at the Asian Composers Forum since 2011.

Forlivesi is also one of the very few accredited scholars of the traditional music of the Ainus and the author of a major finding on this subject that was published by the Journal of Comparative Cultures of the Sapporo University; his research data have been used to implement and redirect information in libraries and databases about the traditional Ainu music.

Documentation on his compositional activity has been issued, among others, by the CDMC of Paris, IRCAM, the Akiyoshidai International Art Village, the Yamaha Music Foundation.

Forlivesi has served as a nominator and evaluator for several institutions; he has been the co-founder and artistic director of the International Composition Competition and Workshop “Unique Forms of Continuity in Space” (titled after Umberto Boccioni's Futurist sculpture), an intercontinental event held in Tokyo (2008), Melbourne (2009, 2010) Adelaide (2010, 2012), Kyoto and Fermo (2019) during the Week of the Italian Language in the World, under the High Patronage of the President of the Italian Republic.

He served as a nominator for the Kyoto Prize in 2008 and 2011 (awarded musicians include Boulez and Harnoncourt) and a Selection committee member for the Fulbright Commission US-Italy in Rome.

An interpreter of contemporary organ compositions, Forlivesi is sought after also for his expertise in early keyboard music. He performed in major venues including the Papal Basilica St. Francis of Assisi, the Cathedral of Verona, the Cathedral of Fermo, the Cathedral of Imola, the Peterskirche of Wien, the Kloister Maria Enzersdorf, the Franziskanerkirche of Salzburg, the Stuttgart Organ Festival, the Sacred Music Festival of Reggio-Emilia and the Church S.M. della Pace of Sassoferrato. He extensively toured in Japan playing in Azuchi, Osaka, Kyoto, Yamanashi and gave a recital in Haramachi, a chapel next to the evacuation zone of the crippled Fukushima Daiichi Nuclear Plant. He is the curator of a rare portativo organ Carlo Traeri (1671) and is regularly called to test and play antique Italian organs.

Forlivesi has been invited to give a recital at the Notre-Dame Cathedral of Paris and is the organist of the Basilica Sanctuary St. Claire of Assisi, an important UNESCO site.

He often conducts early music as Maestro al cembalo and has been asked to stage and conduct his own works at the Kyoto Bunka Center, the Sainte Chapelle of Paris, the Akiyoshidai International Art Village and the Hamburger Klangwerktage.

Forlivesi taught for two years at the University of Sapporo (Japan, 2008-2010) and in 2010 he was appointed professor at the Italian State Conservatory of Music.

At present he is a full-time Professor at the State Conservatory of Music Rossini of Pesaro.

He joined the Hochschule für Musik Stuttgart in 2019 as a one-year Professor of Composition (representative of Marco Stroppa).