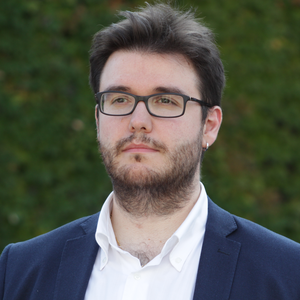 Silvio Bartoli was born in Monfalcone in 1989. He began studying the piano first in the pop / jazz genre with Francesco Contadini and Giorgio Pacorig and then continued with the classical one with Maestro Mariarosa Pozzi, obtaining the bachelor degree with Maestro Claudio Crismani at the "G.Tartini" Conservatory of Trieste. In 2012 he began to study classical composition with Maestro Stefano Bellon, composer and teacher who trained him and with whom he is still studying; he enrolled the last year bachelor dregree in 2018 with Maestro Fabio Nieder.
In 2015 he wrote for the cultural association "Woland" a piece for piano solo within the "Prometheus Project", a project based on synaesthetic research (connection between sound and color) of the Russian composer Aleksandar Skrijabin.
In 2016 he collaborated in the soundtrack composition of Max Reinhardt's 1911 silent film "Eine Venetianische Nacht", composition for large wind ensemble in neoclassical style, whose projection and live performance took place at "Le Giornate del Cinema Muto" of the same year, one of the most important international festivals dedicated to the silent film that is held annually in Pordenone, receiving great acclaim from the critics. Also in 2016 he won a composition competition in Trieste with a scholarship/internship at the University of Toronto with a premiere. His compositions are performed in Italy, Canada and the Netherlands.
He had participated in masterclasses with Maestro Salvatore Sciarrino, Maestro Alessandro Solbiati, Maestro Peter-Jan Wagemans, Maestro Hans Koolmees, Maestro Robin de Raaf, Maestro René Uijlenhoet, Maestro Chaya Czernowin, Maestro Stefano Gervasoni.
Applying to three different schools, "Trinity Laban" (London), Royal Conservatoire of Antwerp and the "Codarts University of the Arts" (Rotterdam), and having been accepted by all three, he decided to attend the second year of the bachelor degree in Rotterdam, within the European project "Erasmus Plus" (first and only non-percussion student of the Tartini Conservatory to have been admitted to the Rotterdam Arts University until now); he studied composition with Maestro Hans Koolmees and electronic composition with Maestro René Uijlenhoet.
The experience abroad has given him the opportunity to forge important relationships with young concert performers, writing piece specifically for them.
In 2018 he won a competition organized by Maestro Emmanuele Baldini, artistic director of the Chamber Orchestra of Valdivia (Chile) and concertmaster of the São Paulo Symphony Orchestra (Brazil); the competition consisted of composing a movement (the fourth) of the "Suite Verdi", a composition based on the nineteenth-century symphony form on Verdi themes and arias. He won the first prize both given both from the popular jury as well as from the orchestra.
The award will consist of making an original composition for the Valdivia chamber orchestra in the upcoming season, 2019.
In 2018 he won the "Premio Nazionale delle Arti - categoria C, composizione per orchestra",  a competition organized by the Ministry of University and Research, with the piece "Glitches", a tribute to Claude Debussy and Gioacchino Rossini.The jury was formed by Alessandro Sbordoni, Gilberto Bosco, Rosario Mirigliano, Marco Pedrazzini and Fausto Sebastiani. The composition will be performed by the ONCI at the Auditorium Parco della Musica in Rome.
Beside composing contemporary classical music, he also write for images, commercials, films and advertising.

Something under the ocean?

37
0 / 0
We use cookies to enhance your experience. Dismiss this message or find out more here