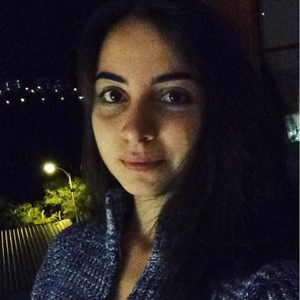 Aslıhan Keçebaşoğlu was born in Ankara, on December 16th, 1994. She began her formal musical studies in 2007 by entering the examinations held by the state conservatory of Antalya. She pursued her education in piano class with Yuriy Sayutkin until the end of high school, which she graduated with the first. In 2010, she came in third place in the national Chopin Competition held in Ankara. Keçebaşoğlu’s first participation in an international piano competition was in the Stockholm competition for Young musicians held in 2012, where she obtained an honorable mention. After her high school graduation, Aslıhan Keçebaşoğlu chose to continue her music studies in the discipline of composition. Consequently, she attended the entrance examinations of Bilkent University Faculty of Music and Performance’s theory and composition department. Winning a full scholarship, she began her undergraduate studies under the guidence of Onur Türkmen. Her piece ’Moments for Six Distinct Manners’, which she wrote in 2014, was played in the 6th New Music Days of Bilgi University by the German ensemble ‘Garage’. This same piece led to the first international event in her composing career: she was invited to a series of concerts of young Turkish and German composers in Köln in February 2016, where her piece was once again interpreted by the ‘Garage’ ensemble. Two of her other pieces, the ‘Duet for viola and piano’ and her ‘Trio for Flute, Cello, Piano’ were played in the 8th and 9th ‘Sesin Yolculuğu’ composers festival at the Süreyya Opera house in Kadıköy, Istanbul. Her another piece ‘Encounters’ was played by Hezarfen Ensemble in the 10th of same festival. She has also attented composition masterclasses held by Mark Andrè‚ Riccardo Piacentini and Michael Ellison. In January 2017, she attended Bilkent Composition Academy conducted by Mark Andre as an active participant. After an intense study with Mark Andre for a week, her ensemble piece ‘Encounters' was played once more by Hezarfen Ensemble in closing concert of Bilkent Composition Academy at Bilkent Concert Hall. She was commisioned by Bilkent Symphony Orchestra for an orchestral music in 2017. Her first orchestral music ‘Introspection’ written for Bilkent Symphony Orchestra were performed by the orchestra, under the baton of Vladimir Ponkin, on 3rd February 2018. Aslıhan Keçebaşoğlu graduated from the Faculty of Music and Performing Arts in Bilkent University, with studying composition and music history with Onur Türkmen. She also studied harmony and orchestration with Yiğit Aydın; form, polyphony and fugue and post tonal theory with Tolga Yayalar, Ear-training with Maria Nowotna as well as conducting and score reading with Işın Metin. She is currently studying for a degree in M.A Composition Department at Sibelius Academy with Veli-Matti Puumala.