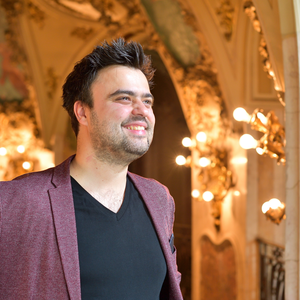 Vlad Răzvan Baciu is a prolific composer, whose portfolio includes more than 100 orchestral works, choral works, operas, and chamber music pieces. Baciu has been awarded multiple musical composition scholarships in Romania, Germany, Netherlands, Estonia, Greece, and Bulgaria, and has participated in several prestigious European Union competitions, receiving numerous awards and prizes. In 2020, he was invited to reside at the Hanse-Wissenschaftskolleg (Institute for Advanced Studies) in Delmenhorst, Germany as Artist-in-Residence where he composed the “Candle of the Soul” opera. And in 2021, he received the prestigious Fulbright Scholarship to conduct a research on the American Contemporary Music and compose chamber and symphonic works at Indiana University, Jacobs School of Music.

Baciu’s original compositions have been recognized in his home country of Romania, as well as throughout the European Union. His composition, “The Cry of the Kogaionon”, a symphonic dirge for big band and symphonic orchestra, written in memory of King Michael I of Romania, won first prize at the “Carl von Ossietzky” Competition in Germany in 2018. His work “Carmine“, composed for symphonic chamber orchestra, has been included in the Romanian National Radio Archives. He was also invited to compose “The Hymn of The Bucharest Academy of Economic Studies“.

Baciu is also an accomplished conductor, having conducted the National Symphonic Orchestra of the Teleradio-Moldova Company – Kishinev, The Orchestra and Big Band of “Carl von Ossietzky” University of Oldenburg in Germany, The Orchestra of The National University of Music in Bucharest, SonoMania Ensemble, HEART-CORE Choir, HEART-CORE Boy’s Choir, as well as the OXIGEN Orchestra, founded by Baciu himself. During the 2004 Olympic Games in Greece, he prepared and conducted the AMADEUS Chamber Choir in a performance broadcast on the BBC. His works have been interpreted by young virtuosos and renowned ensembles, such as: Orchestra of the Bacău Philharmonic, Choir of the Craiova Philharmonic, Astra Choir, Profil Ensemble, SonoMania Ensemble, and Fractales Ensemble, among others.

Baciu received his Ph.D. in Music, specializing in Composition, from the National University of Music Bucharest (NUMB) in 2016. He also holds master’s degrees in Orchestral Conducting (2015) and Classical Composition (2013). At 15, he was admitted to the ”Katerina Maska” Conservatory in Athens, where he studied piano interpretation and graduated with the Άριστα Παμψηφεί distinction. In 2010, Baciu became president of the HEART-CORE Cultural Association, which is involved in various cultural projects, with a special focus on promoting contemporary music.