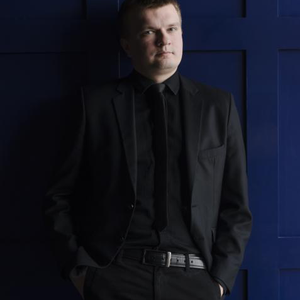 Vitaliy Kyianytsia (b. in 1991) is a Ukrainian pianist and composer. He was born in Kyiv, where he started his musical education at the age of six. He is a graduate of the Tchaikovsky National Music Academy of Ukraine as a pianist and composer. Since 2017 he lives in Germany. In 2017-2018 he was a member of International Ensemble Modern Academy (Frankfurt am Main, Germany), where he had a possibility to work and perform under the guidance of Ensemble Modern members. Since 2017 he is a student of Prof. Nicolas Hodges in Stuttgart Music University (New Piano Music Department). Vitaliy Kyianytsia has received awards from the juries of several international competitions, such as the Orleans Piano Competition 2016 (Andre Boucourechliev Prize), the Masterpiece Management Composition Competition 2016 (Cologne, Germany), the Transatlantyk Instant Composition Contest Award 2017 (Lodz, Poland), the ACC Composition Competition (Gwangju, South Korea), the Lviv Composition Competition-2016 (Ukraine), Repertoire Pianistique Moderne Piano Competition 2018 (Paris) and the Anton Rubinstein Competition for performer-composers (St. Petersburg, Russia, 2009). He participates regularly in major contemporary music events, such as the Lucerne Festival Alumni Ensemble and Academy (2016, 2017), Mixtur Festival 2017 (Barcelona), Acht Brucken Festival (Cologne, Germany), Dyagilev Festival (Perm, Russia), Ligeti Festival "Atmospheres" (Frankfurt, Germany), Impuls-Festival 2015 (Graz), Wittener Days for New Music (Witten, Germany) and Klangspuren Schwaz 2014 (Austria). He has given contemporary piano recitals in Germany, Spain, France, Poland, Italy, Lithuania, Romania, Russia, etc. He participates regularly in major Ukrainian Festivals and concerts as a composer and pianist. He is one of the founders and the pianist of Sed Contra Ensemble (Kyiv, Ukraine). As a pianist he performs jazz both as a soloist and with ensembles, also playing free-jazz and experimental jazz. He is a holder of DAAD scholarship for young artist in the field of music. Email to contact - vkyianytsia@yahoo.com