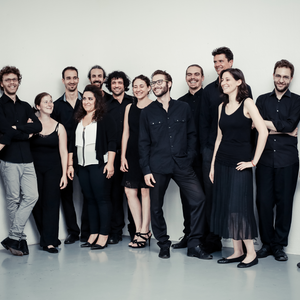 Schallfeld is an international ensemble for contemporary music based in Graz. The group sparks the interest of its audience by its vivid virtuosity and refined chamber music sound, paired with interpretations that pay special attention to concert format, creating events that adapt to the specific venue while aiming for a new dimension of listening.
The ensemble was founded in 2013 by alumni of Klangforum Wien and composition students of Kunstuniversität Graz. It currently consists of musicians from 8 nationalities and reflects the diversity and different interests of its members in its artistic direction. In the last few years, Schallfeld has been able to establish itself on international stages through exciting programming with a focus on young composers, innovative concert-stagings as well as through the quality of its collective improvisations and innovative use of live-electronics.
Schallfeld sees its mission in bringing music of international young composers to Austria and acting as an ambassador for new music production abroad. Besides its own concert cycle in Graz, Schallfeld is regularly guest in festivals in Austria and abroad, such as Wien Modern, Impuls Graz, Klangspuren Schwaz, Darmstädter Ferienkurse, Afekt (Estonia), Poznan Musical Spring (Poland), EMA (Spain), Daegu International Contemporary Music Festival (South Korea). In 2016 and 2017 Schallfeld has been selected by the Ministry of Foreign/cultural Affairs as rappresentative of NASOM (New Austrian Sound of Music), a program designed to promote young Austrian artists internationally.
The ensemble is also involved in pedagogical activities and collaborative theater projects for children and adults. Schallfeld is funded by the municipality of Graz, the federal state of Styria, the Austrian federal Government and receives generous support from the University of Music and Performing Arts Graz and the iem (Institute for Electronic Music and Acoustics) Graz. Past projects by Schallfeld have also received grants by the EU (Youth in Action), Music Austria (MICA) and KulturKontakt Austria.