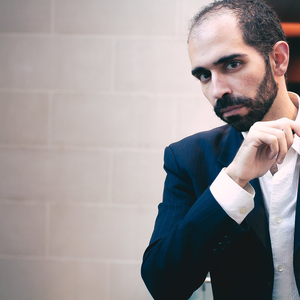 Edo Frenkel is a "feisty" (LA Times) young conductor, composer, and pianist, whose work, in its breadth and quality, is quickly gaining attention for his "performances of both intimacy and intensity" (Opera Magazine) and "groundbreaking integration of raw emotion and music" (Rochestariat).

Mr. Frenkel has worked as the assistant conductor to a number of the world's great artists including Simon Rattle and the London Symphony Orchestra, Brad Lubman, Franck Ollu, and Barbara Hannigan. In addition to working as Hannigan's assistant he served as répétiteur, coach, and keyboard player for the LUDWIG European/US tour with Barbara Hannigan and Equilibrium Young Artists.

As a keyboard player, Mr. Frenkel also served as Barbara Hannigan’s rehearsal pianist, collaborating on the Satie: Socrate project at the Ruhrtriennale Festival in Bochum, Germany and at the Park Ave. Armory in New York city. He also performed in the Philadelphia Orchestra's SoundLAB as part of the Barnes/Stokowski Festival.

He has worked in masterclasses with artists such as Susanna Mällki, David Zinman, Pierre-André Valade, Cristian Măcelaru, Tito Muñoz, and Peter Eötvös.

At home in both notated and improvised musics, Mr. Frenkel performs regularly in concerts involving creative music making. Additionally, he has performed with Jazz greats Peter Erskine and Randy Brecker.

Mr. Frenkel’s music has been performed in international festivals by artists such as Talea Ensemble, EXAUDI vocal ensemble, JACK quartet, Tonküntsler-Orchester Niederösterreich, and Ensemble Paramirabo. His music has been performed in the US, Canada, Japan, and in Europe. He has been featured in such festival’s as Royaumont Voix Nouvelles (France), CEME (Israel), and the ME_MMIX festival (Spain). Current projects include Megaphone, for amplified muted tuba and fixed media, commissioned by Jack Adler-McKeen, How to draw the human figure 3, for Ensemble x.y., and 6 monologues, a concert length piece cycle for solo piano of Yu-Ting Huang.

In addition to his work in music, Mr. Frenkel active within the realm of Critical Theory and Philosophy, particularly on the intersection of art and politics. He has written a number of essays on topics ranging from the influence of neo-hellenistic Stoicism in Francesca Caccini’s opera La liberazione di Ruggieo to the evolution of the conductor’s role and its political implications in New Conceptualism.

How to draw the human figure, 1. an anatomical approach