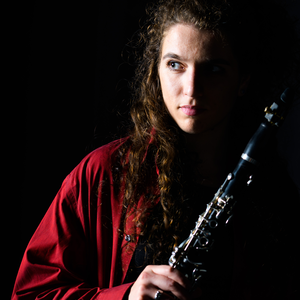 Rebecca is a (bass)clarinetist currently studying in Master Performance at the Bern University of the Arts in the class of Ernesto Molinari.
She is fully and passionately committed to contemporary music, interdisciplinary creation,
and free improvisation. She is also involved in jazz and Balkan/Klezmer music.
She has co-founded various groups: the Tzupati Orchestra (Balkan/Klezmer), NoRest! (free
improvisation quintet), FÜNMT (contemporary music) and IPSO (interdisciplinary collective).
She also participates in festivals such as the Darmstädter Ferienkurse für Neue Musik, the
Winterthurer Musikfestwochen, Klangspuren Schwaz and the Musikfestival Bern. Her numerous
musical activities have taken her to the four corners of Switzerland, but also to Italy, Germany,
Belgium and as far as Hungary, as well as to Austria, where, among other things, she took part
in the summer academy of the Ensemble Modern Frankfurt 2021 (IEMA).
Finally, her career has led her to collaborate on numerous occasions with different
professionals: she has worked with composers such as Jacques Rebotier, Pierre Jodlowski,
Gemma Ragues Pujol, Adriana Hölszky, as well as with musicians/improvisers such as Jacques
di Donato, Franziska Baumann, Frank Gratkowski, Marc Unternährer, Marc Kilchenmann,
Antoine Françoise and Françoise Rivalland.