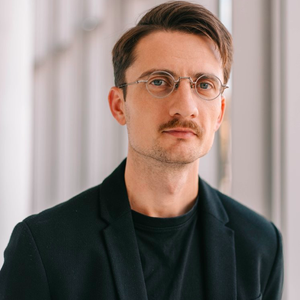 He specialises in performing contemporary music, as a soloist and a chamber musician. His interests mostly revolve around multi-percussion and intermedia genres. His repertoire covers classical literature as well as new works. He often focuses on post-instrumental issues and on the corporeality of performance. He has collaborated, among others, with Pierre Jodlowski, Sara Nemtsov, Trond Reinholdtsen, and Matthew Shlomowitz. He creates his own sound projects—the most recent ones are ‘Lupnik’ and ‘Komentarz eufemistyczny’. His activity covers experimental music, free improvisation, composing and performing music for dramatic and dance theatre (e.g. ‘Manhattan’) and for silent film. Writings of his have been published in the ‘Glissando’ magazine. Among his most significant achievements are the world premiere of ‘En Face’ by Sarah Nemtsov—a concerto for solo percussionist, narrator, and large orchestra—and numerous solo recitals (also at Musica Electronica Nova, in 2021).

Currently he is part of Spółdzielnia Muzyczna contemporary ensemble, Krakow Improvisers Orchestra, duos with Paulina Owczarek and with Michał Lazar, and Echoes of Peace. As a guest artist he occasionally works with the Hashtag Ensemble and the New Music Orchestra. He has collaborated with the Juliusz Słowacki Theatre in Kraków, the Rozbark Dance and Movement Theatre in Bytom, and Scena Supernova in Kraków. For many years he was a member of the Percurama Percussion Ensemble.

He learned in Denmark, Poland, Austria, and Germany—this includes the Academy of Music in Gdańsk and the Royal Danish Academy of Music in Copenhagen (the reputable class led by Prof. Gert Mortensen as well as the prestigious Soloist Class), Internationale Ferienkurse für Neue Musik in Darmstadt, the impuls Academy in Graz, and the Ensemble-Akademie Freiburg with ensemble recherche.

He defended his doctoral thesis at the Krzysztof Penderecki Academy of Music in Kraków, where he is currently teaching in the Department of Percussion and Contemporary Music.