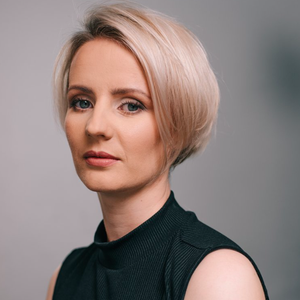 Born in 1987 in Limanowa, she began her flute lessons at the age of ten in the Fryderyk Chopin State Music School in Nowy Sącz. Graduate of the Academy of Music in Kraków, from the class led by Prof. Barbara Świątek-Żelazny. She also perfected her skills in Hochschule für Musik Mainz, where she learned from Dejan Gavriĉ as part of the Erasmus-Socrates programme, and further at Univeristetet i Agder in Kristiansand, under Prof. Jørn Eivind Schau and Prof. Lars Asbjørnsen.

She is artistically active as a chamber musician and in the orchestra. In Norway she completed her apprenticeship in Kristiansand Symfoniorkester (season 2013/2014), to perform later with Det Norske Fløyteensemble. In 2015–2018 she was the flutist of Music Theatre Lublin; in the 2018/2019 season she worked with the Opera at the Castle in Szczecin, and in 2019–2021, with the Lower Silesian Philharmonic in Jelenia Góra.

Member of Spółdzielnia Muzyczna contemporary ensemble since 2015. With the group she has performed at numerous festivals and in many projects, such as the International Festival of Contemporary Music ‘Warsaw Autumn’, Sacrum Profanum, the Festival of Traditional and Avant-garde Music KODY, ELEMENTI, NeoArte, Sinfonia Varsovia Swojemu Miastu, Kromer Festival Biecz, Audio Art, opera rara, Workin’ Progress, and Ars Moderna.

In 2019 she made a guest appearance at the Warsaw Autumn with Ensemble Kompopolex. In the same year’s summer courses run by NOR59-Strykeinsitutt (Oslo) she taught the flutes.

37
0 / 0
We use cookies to enhance your experience. Dismiss this message or find out more here