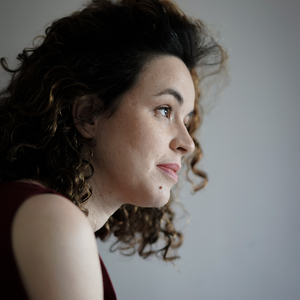 Sarit Shley Zondiner, born 1984, is a composer based in Jerusalem, Israel. Her compositions have been performed in major festivals in Israel, including The Israeli Music Festival in Tel Aviv and the Pianos Festival in Jerusalem. Her orchestral pieces have been performed by the Jerusalem Symphony Orchestra, Ra’anana Symphonette Orchestra, and the Beer-Sheva Sinfonietta.
She is currently a PhD candidate in a joint program of the Hebrew University and the Jerusalem Academy of Music and Dance, under the supervision of Dr. Assaf Shelleg and Prof. Amnon Wolman. Her research topic concerns developments in timbre in the music of the beginning of the 21st century, focusing on the compositions of Mark Andre, Philippe Hurel, and Chaya Czernowin.
In 2019-2020 she was awarded the Siday Fellowship for Musical Creativity for her outstanding orchestral compositions, which explore, fuse, and navigate between different melodic and textural soundscapes.
Shley Zondiner has participated in master classes with Chaya Czernowin, Toshio Hosokawa, Zygmunt Krauze, and Philippe Leroux. In 2018, she composed a chamber opera, “ASD,” after which she won a residency at the Felicia Blumental Music Center in Tel Aviv. Between 2007-2014 she was an America Israel Cultural Foundation recipient.
Shley Zondiner holds an M.mus degree from the Jerusalem Academy of Music and Dance, where she studied with Prof. Mark Kopytman and Prof. Ari Ben Shabetai, and is a graduate of the Israel Arts and Sciences High School in Jerusalem, where she studied with Prof. Andre Hajdu and Prof. Michael Wolpe.