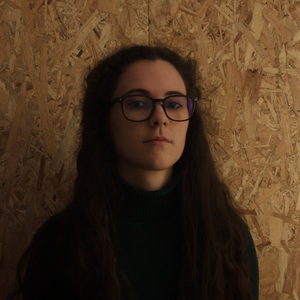 For her works, she won the first prize at 30th International Competition “Città di Barletta” (IT); a first absolute prize in section A and a first prize in section B at “17th Vitti international Composition Competition” (IT); a second prize at EUROPEAN COMPOSER COMPETITION by The Franz Schubert Music Conservatory in Vienna (AT); a Distinguished Mention at “Please Yourself” ACO Composition Competition (UK); a second prize at the Second International Music Competition of Academia Musica in Vienna (AT) and she has been selected for the 27th Youth Composer Meeting by Orkest de Ereprijs (NL). On this occasion, she won the RSKT 2021 commission for a new orchestral piece that will be premiered during the Andriessen Festival 2022, in Arnhem (NL). Moreover, her piece “HEKS” has been played again by Orkest de Ereprijs at the Gaudeamus Musik Week, for Gaudeamus Festival in Utrecht (NL).
In 2021, she also won the Juurilla Commissioning Grant from Versoi Ensemble (FIN-USA) for a string trio to be performed both in Finland and USA, and she received a commission from La Piana del Cavaliere, for the project “Coincidenze” in Orvieto (IT) realized in collaboration with Chigiana Academy (IT), Impuls Festival (DE) and Gaudeamus Festival (NL). With a text by Dante Aligheri, her piece for string orchestra and narrator voice has also been performed in the 57th Festival by “Nuova Consonanza” in Rome, on December 2021.
Her pieces have also been performed for University of Padua; AngelicA - San Leonardo Theater Music Research Center and Teatro Comunale of Bologna; Panstwowa Szkola Muzyczna im. Chopina di Olsztyn in Poland (PL), Teatro Comandini by Socìetas Raffaello Sanzio in Cesena and more.

She also worked in various productions, from dance to theatre, with original soundtracks and sonorizations, such as with Michele di Giacomo (“Umana Natura” about Maurizio Bufalini in 2019; “Il '68, la ribellione che cambiò il mondo”, at Bocconi University of Milan and “We Reading Festival” in 2018; “Leonardo alla Prova” based on the character of Leonardo Da Vinci, in 2019), Francesco Dell'Accio (“L'ultimo giorno di un condannato a morte”, in 2020, based on Victor Hugo’s novel) and Piero Ramella (“Virtual Landscape / For the Rust”, in 2021). This last project has also been selected for screening at Ibrida Festival in Forlì (IT) and “REF - Resilience Festival” by Empirica Records in Foggia (IT), in September 2021.

Livia is one of the founder of In.Nova Fert collective, a young composers association interested in “comunitary” music writing. Among others, In.Nova Fert received by FontanaMIX Ensemble the commission for “Sette canzoni per Bruno”, a documentary-concert about Bruno Maderna that has been premiered at the 64 ° International Festival of Contemporary Music - Biennale di Venezia 2020. “Sette canzoni per Bruno” has also been played in Bologna (“Teatro del Baraccano”, “Torri dell’acqua di Budrio”) and in Reggio Emilia (Teatro “La Cavallerizza”).
With In.Nova Fert, she has also joined other commissions: from “Amici della Musica di Modena” in Modena (IT); “Calendario Giapponese”, an Sylvano Bussotti’s work original transcription played at MamBO - Contemporary Art Museum of Bologna (IT); “Dìa Logos” for string quartet and percussion (played by NEXT ensemble and Teté de Silveira), “Tripla” and “Tripla IV” for large cello ensemble, for Romagna Cello Ensemble and 20cellos by Nicola Baroni; and finally, a small opera about Alessandro Baricco’s novel “Novecento” for Emilia - Romagna Region, with the project “A Genius in your fingers”.

In 2018 he received a special mention for artistic merits from Inner Wheel Club in Bologna, and in the same year she appeared in "Proprio Destino”, a documentary film by Cesare Ronconi and Martina Dall'Ara for Valdoca Theater, which wins the Cinema del Reale Award at the Royal Film Festival in Corigliano d’Otranto (IT) in 2019.

Kammerkonzert no.2 by Jug MARKOVIĆ