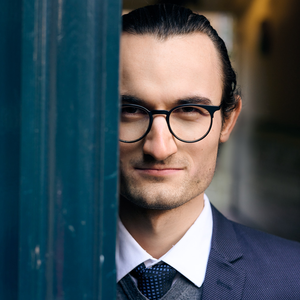 Born in 1998, Marc L. Vogler developed an early passion for music, taking his first piano lessons at the age of four. He continued his passion ever since and became a student of Rainer M. Klaas, Tobias Koch and Paulo Álvares, classical pianists.

After some early experiences as a member of Musiktheater im Revier Youth Orchestra, his major accomplishment during the years 2014-2016 was the world premiere of his modern satirical opera “Streichkonzert” at the age of 16, of which he is not only the composer but also the librettist, performed on January 15. 2016 at the same opera house where he started as an intern a year before.

In summer 2016, he finished school with the qualification Abitur (university entrance level) and continues his path with academic music studies in Düsseldorf and Cologne at the renowned Hochschule für Musik und Tanz Köln majoring in composition (Prof. Manfred Trojahn & Prof. Brigitta Muntendorf), orchestra conducting and piano. That gave him the opportunity to establish himself in the world of well-known classical music festivals and obtain engagements throughout Europe, such as:

- Composition Commissions for Europäisches Klassikfestival with the Hungarian symphony orchestra Pécs in 2018, the festival AchtBrücken of Kölner Philharmonie (radio broadcast and interview on WDR 3) as well as for the symphonic orchestra Sinfonia Königswinter and BTHVN 2020 (Nationwide Beethoven Celebration 2020)

- Premiere of his “Ave Maria” for soli, choir and organ in Milan Cathedral, Italy (2018)

- Performances i.a. with the symphonic brass orchestra Junge Bläserphilharmonie NRW (ExtraSchicht festival in 2018), the ensemble Musikfabrik (2019), the ensemble Offrandes (2019) and for the UNESCO-Candidature concert of and on top of the oldest French open sea lighthouse Cordouan (2018)

- Artist in Residence in France, further concerts in Austria (Vienna) and Japan

As a conductor, Vogler worked, inter alia, with the chamber choir of Hochschule für Musik und Tanz Köln and as assistant of Christian von Gehren with the RSH Düsseldorf Symphonic Orchestra. He has taken part in Masterclasses with Georg Friedrich Haas, Carola Bauckholt, Oliver Schneller and Helmut Lachenmann.