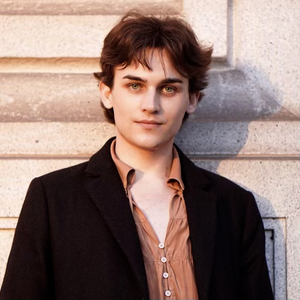 Nick Main is a composer, vocalist, and poet based in the San Francisco, New York, and Helsinki metropolises. As a singer, their technique is rooted in the bel canto and English traditions which influence their instrumental writing. In composing, they seek to combine traditional classical and modern musical elements with an underlying lyricism. Nick’s music has been performed by ensembles and soloists including Gabriel Cabezas, Panacea Duo, Friction Quartet, Wild Rumpus, and Left Coast Chamber Ensemble and has also been heard on 91.7 KALW San Francisco’s “Revolutions per Minute” radio with Sarah Cahill. Nick serves on the junior advisory council of Musaics of the Bay, who has commissioned them multiple times.

Nick has participated in programs such as the Boston University Tanglewood Institute, The Walden School, Fresh Squeezed Opera Vocal Lab, highSCORE Festival, and Del Mar International Composers Symposium. They have studied with many prominent mentors including Kurt Rohde, Kamel Boutros, Stephen Main (no relation), Dan Becker, and John Adams, as well as Huang Ruo, David T. Little, Lisa Bielawa, Katherine Balch, and Stephen Powell through the Mannes School of Music at The New School. Nick is currently pursuing their bachelor’s and master’s degrees in the Sibelius Academy at the University of the Arts Helsinki where they study composition with Riikka Talvitie and voice with Hannu Niemelä. In addition to their formal studies, Nick enjoys writing poetry and exploring the interconnectedness between language and music.