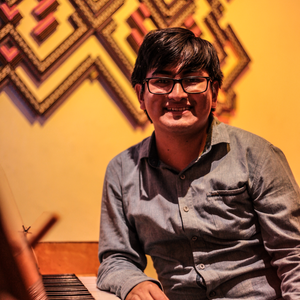 Michael Augusto Magán Palomino (1995) Composer born in Huancayo, Peru. He is currently a graduate of the musical composition career at the “Universidad Nacional de Música del Perú” (former “Conservatorio Nacional”). Also, he had private studies in conducting, electroacoustic music and education.
He has premiered various works in recitals, festivals and competitions in Lima, Huancayo, La Plata (Argentina) and Mexico City. Among them we can highlight a premiere with the German duo "Lux Nova", his participation in recitals at the “Escuela de Música Suzuki” in Huancayo and premieres at the contemporary music festival in Lima "La Trenza Sonora" in 2017 and 2018. In addition, in 2015 and 2019 he participated in the “Seminario-Encuentro entre compositors e intérpretes”, organized by the Faculty of Fine Arts of La Plata, Argentina. He was part of the “Ensemble de Laptops de la Universidad Nacional de Música del Perú” (ELUNM). He participated with this ensemble in the MUSLAB festival, held in March 2020 in Mexico City. Currently he is a member of the audiovisual experimentation duo "Pareidolia Spectral" and is creating a cultural space in the city of Huancayo called "Nodo Sonoro".