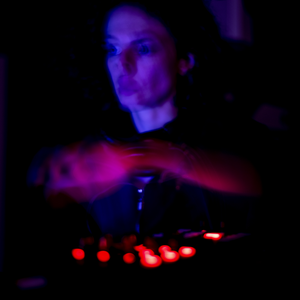 Golbon is a techno DJ, producer and visual artist from Tehran. A former Ottawa Canada resident, she first appeared DJ-ing in local events in Ottawa in 2016. She hosted Twisted Transistor weekly
on Ottawa’s community radio CHUO.FM (2017 – 2018). Her debut EP album EKUR and a single, Lapse, came out under Low Noise Productions in July 2020. In 2021 she had her second EP, In the
Name of Drums, under Neu.Gravity and another single, The State of None, with K.O.P.I records. Her latest EP Perfect Storm is a collaboration project with the Canadian artist KI and will be
released in July 2021. These added to her other two singles Mefraq and Telemaque published in 2019 and 2020 under Iranian record label Noise.A.Noise. She is currently working on an ambient
concept album and has two EP releases coming up in the nest few months.
Golbon has began practicing as a visual artist before getting involved in the techno and experimental music scene. Her activities as a visual artist range from illustration, painting, comics and
creating content for audiovisual performances. She is most interested in altering spaces through large digital and physical installations. Golbon has a Ph.D. in social sciences (Canadian Studies interdisciplinary field) from the University of Ottawa. She did her master’s in Human Kinetics at the University of Windsor and has a bachelor of science from Tehran.