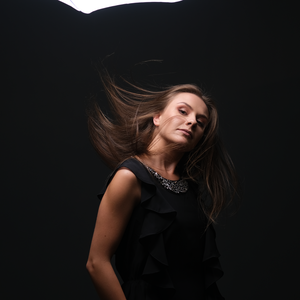 Sabrina is a foundress of the Sea Orchestra in Gdańsk, which specialty is contemporary music. At the present she cooperate with Elblag Chamber Orchestra and the Museum of II World War in Gdańsk. In 2020 she started temporary cooperation with the Arte Creatura Music Theatre, preparing performances of “Night in Venice” by J. Strauss II and “Countess Maritza” by I. Kálmán. To date, she has cooperated with many others, including the Beethoven's Academy Orchestra, the Elbląg's Chamber Orchestra, the Baltic Philharmonic Orchestra, Sinfonietta Pomerania, the Symphony Orchestra of the Academy of Music in Gdańsk, and the Chamber Orchestra of the Academy of Music in Wrocław.

In 2017 she prepared a stage version of Igor Strawiński's ballet L’Histoire du Soldat. In 2019 she took part in the 2nd Competition Citta di Brescia for orchestral conductors of modern and contemporary repertoire in Italy. In 2017 she took part in the II Nationwide Competition of conducting students in Wrocław. Then she also conducted a concert of jazz and movie music, where she performed three pianos and jazz orchestra. Afterwards, she conducted the Sea Orchestra with a Ravel’s Piano concerto F and Sibelius Violin Concerto d. In 2019, on her mid-term exam she has been conducted G. Puccini Tosca and she has got the highest note from the jury. As a best student, she was conducted the Orchestra of the Academy of Music in Gdańsk in 2019.

Sabrina graduated the Academy of Music in Gdańsk in a symphony and opera conducting class of Kai Bumann's (2019). She is also a graduate of theory of music class (2018). She graduated high music school in violin class in 2012.