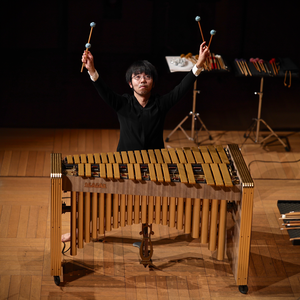 Born December 24, 1988 in Sendai City, Miyagi Prefecture. Since debuting at the same time as the second prize in "Kyo-Gaku IX" sponsored by the Japan Society for Contemporary Music in 2010,He is a percussion instrument / vibraphone player who has produced more than 300 new premiere works and is known as the "premieres freak".He has also emerged as a composer with the 2019 10th JFC Composition Award. In 2020, he released his latest album "Songs in my recollection Mizuki AITA plays Japanese melodies" from the Three Shells label.Received acclaim from various newspapers, including the record art special edition and the recommendation of Sarai. Tokyo Opera City Cultural Foundation B → C Mizuki Aita Percussion Recital succeeds in enthusiasm in Sendai / Tokyo,NHK-FM Broadcast for two weeks in his performance. He is engaged in various activities as a new generation artist. Received the Osaka Cultural Festival Encouragement Award in the 2nd year of Reiwa for the achievements of his vibraphone solo recital in OSAKA, which introduced various charms of his vibraphone and contemporary works.