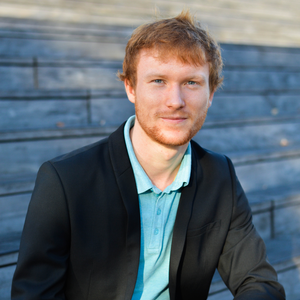 Arthur Dhuique-Mayer studied at The Conservatoire National Supérieur de Paris, where he received two Bachelor’s degrees: one in Percussion with Gilles Durot, and the other in Chamber Music. He is currently pursuing a Master’s degree in Orchestral Performance at Manhattan School of Music with Chris Lamb.
A versatile percussionist, Arthur is passionate about many different styles and repertoire, and is uniquely trained in the gamelan and in choreographic accompaniment. He has earned international soloist prizes from the Percussive Art Society (p.a.s.) on Timpani, Marimba and Vibraphone in 2014, and Zildjian in 2015. Additionally, has performed a solo concerto performance with a national army orchestra of France.
During his time at the CNSMD in Paris, he founded the group "Ensemble Dérive", a sextet with which he would earn his which his degree in Chamber Music. Avid in the search for new musical ideas, Ensemble Dérive has continued to grow and provide new sources of inspiration and perspectives on interpretation. The ensemble has recorded and collaborated with many composers, including Bastien David, Dylan Corlay or Rikako Watanabe.
Equally at home on the orchestra stage, Arthur has performed with the Orchestre de Paris, Orchestre Philharmonique de Radio France, Orchestre National de France, Opéra de Paris, Orchestre Les Siècles.