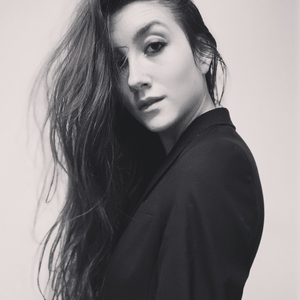 Annie Nikunen is a NYC-based composer, flutist, dancer, choreographer, sound artist and radio broadcaster, whose work ranges from concert music and field recordings to dance and film. Her work explores connections between composition and choreography, always considering the physicality of sound in relation to movement and space. Nikunen has an intimate relationship with movement, which is the infrastructure of her work. Introduced to ballet at 4 years old, she entered music thinking as a mover. After initially pursuing ballet on a professional track, selected to be the youngest Joffrey Ballet School Trainee at 13 amidst an age range of 13-24, she began exploring various modern dance styles - namely that of Isadora Duncan, Merce Cunningham and Yvonne Rainer, among others - as well as contact improvisation. She utilizes and amalgamates elements of ballet, modern and contact improv in her practice. Her research interests and critical writings examine sound-body connections, composer-choreographer relationships, embodied cognition, and sound’s relationships with gesture, language/text, emotion and memory.

Choreography is a significant part of Nikunen’s compositional process; she sees music performance/composing/dancing/choreographing as four sides of the same square. The physical and mental aspects in movement are ingrained in her mapping of sound. She also incorporates field recordings in her work, namely from cathedrals and similarly resonant spaces. She aims to dissect ephemeral moments of sound that grab her in classical styles and permeate them into new music contexts. She also explores dynamics of human relationships in her work, and is fascinated by cycles of brokenness and healing, and how sound can represent those processes. Her most recent works have been performed by ensembles including International Contemporary Ensemble and Fonema Consort.

Referred to as the "...best flute player in the state of NY" by The Observer, Nikunen performs in contemporary, classical, jazz, dance and Taizé settings. She is a founding member of NYC-based new music group Blackbox Ensemble, for which she is the flutist and Social Media/Marketing Manager. Blackbox performs throughout NYC, recently having been featured in The New Yorker. In music-dance collaborations, Nikunen has played both roles, frequently dancing in collaboration with principal bassist of New York City Ballet Orchestra, Ron Wasserman.

Nikunen is a DJ at WKCR, where she also served as Business Manager and Director of the Classical Department, and coordinated WKCR’s 40th-annual Bachfest. She hosts a weekly show every Friday 3-6pm - Afternoon Classical (“Sounds of City Ballet”) and Bach Hour - during which she highlights music of New York City Ballet, of which she is an enthusiast, as well as film, orchestral and choral selections. The show is recognized and publicized by New York City Ballet. Her interviewees include Ola Gjielo, Rachel Barton Pine, Anne Akiko Meyers, Miró Quartet and others. Nikunen is a music/dance reviewer for Bachtrack, and will soon be working at Schott Music publishing company. She also teaches Advanced Ballet/Pointe at Posey School of Dance, the ballet school in which she grew up.

Nikunen holds a BA in Music (composition/theory) from Barnard College, Columbia University, and pursued flute performance at Manhattan School of Music with Tara O’Connor. She studied composition with Georg Friedrich Haas, Ellie Hisama, Seth Cluett and Mahir Cetiz, and was actively involved with Columbia’s Computer Music Center. She was the recipient of the Charles S. Miller Award as well as the Boris & Eda Rappoport Prize, both for distinction in music composition, from Columbia’s Music Department.