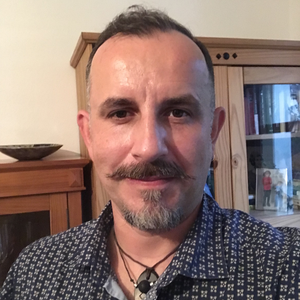 Péter Kőszeghy, *1971 in Hungary, Balassagyarmat.
Kőszeghy studied composition with Paul-Heinz Dittrich and electronic music with Andre Bartetzki at the HfM "Hanns Eisler" Berlin. Since his diploma in 1999 he lives in Berlin as a free-lance composer. Many of his compositions were awarded with prizes and played at festivals as Ultraschall Berlin, Ensemblia Mönchengladbach, Randspiele Zepernick, Tongyoeng International Music Festival Korea and AdeVantgarde Munich. Interpreters of his compositions were the Helsinki Philharmonic Orchestra, MusikFabrik NRW, Kammerensemble Neue Musik Berlin, Ensemble Zagros, Finland, Ensemble Aleph, France and as soloists f.e. Camilla Hoitenga, Peter Veale.
As a composer Kőszeghy doesn’t belong to any kind of aesthetic group. His musical speech often has an exciting and offensive effect. The energy inside the music produced during the performance is the most important motive in his compositorial work, in which he wants to destroy the borders of conventions. Köszeghy’s intention of "plumbing the depths" of instrumental techniques by the virtuosity of his compositions never means the end in itself but always obeys concepts of overriding importance which support the energies in his works. Many of Köszeghy’s compositions are inspired by mythology: the Greek antiquity is as important as the ancient Hungarian "Shaman"-Wisdom, with which he goes back to his own roots in the Hungarian culture.
Kőszeghy lives and works in Berlin.