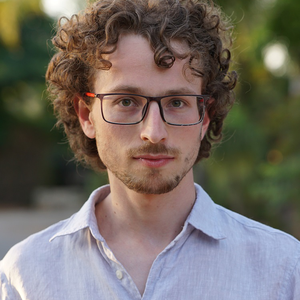 Omer Barash is a composer currently residing in Vienna, where he is a postgraduate student in Electroacoustic Composition at the University of Music and Performing Arts (MDW). His main compositional interests include the exploration of movement and gesture in music, the interrelations between them, and their poetic and performative aspects.

Omer Barash is the recipient of several prizes and awards, including the Svoboda Memorial Prize from McGill University (2020), the 1st prize of the Klon Award for emerging composers from the Israel Composers League (2019), and merit grants from the America-Israel Cultural Foundation (2018-2022), among others.

Born in Israel in 1995, Barash attended the Israel Arts and Science Academy (IASA) high school, and graduated from the Jerusalem Academy of Music and Dance with the highest honours. At the JAMD he was a member of the Tedarim Programme of contemporary music, mentored by Meitar Ensemble. Among Barash’s primary teachers are Karlheinz Essl at MDW, Philippe Leroux at McGill University, and Yinam Leef and Ari Ben-Shabetai at the Jerusalem Academy of Music and Dance. He has also perticipated in masterclasses and seminars with Georg Friedrich Haas, Franck Bedrossian, Pierluigi Billone, Carola Bauckholt, and Clara Iannotta.

All Dead Paper by Thomas METCALF