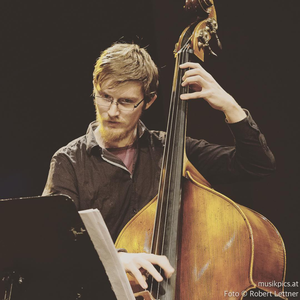 Philipp was born 1991 in Carinthia/Austria. He got his first contact with music and art in the lively music scene of his home town. After studying electric bass, double bass, guitar and piano at the local music school he went to the Anton Bruckner private university in Linz where he studied jazz double bass and music education with Peter Herbert. He finished his undergraduate degree in 2015 with composition and classical double bass as a minor study. After that he started to study classical double bass in Vienna where he finished in 2020. He also did an exchange semester on the Jazz department in Berlin to study with Marc Muellbauer and Greg Cohen. In 2019 he will took part at the international workshop for contemporary music Impuls in Graz/Austria

Philipp is working as bass player and composer in different kinds of music. He is dealing mainly with contemporary and avant-garde music but also with Jazz, experimental noise and rock music. He released three CDs under his own name and is a member of the Viennese association Freifeld (www.freifeld.at) whose aim is to support modern and progressive music in Vienna. You can find a detailed discography on his homepage.
Philipp is also playing with the Viennese ensemble for contemporary music STUDIO DAN and the Christoph Cech Jazz Orchestra Project. He also played with Georg Graewe, Andreas Schreiber, Joanna Lewis, Wolfgang Reisinger and Frank Gratkowski the name a few.
In 2017 Philipp got a scholarship from the Office of the Federal Chancellor in Austria in order to honor and support his artistic work.

Just right into it