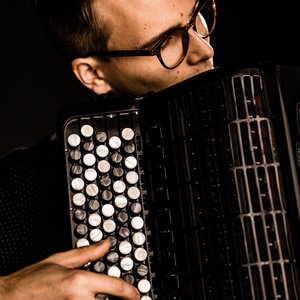 Matti Pulkki (b.1991) performs frequently with different chamber ensembles and as a soloist and enjoys collaborating with composers working on new music for accordion. His solo repertoire concentrates on contemporary music but he also interests himself in transcriptions from Baroque to the 20th century. Pulkki performs solo recitals both in Finland and internationally and has made appearances in international festivals. Pulkki has made appearances in ensembles like Impuls Academy Ensemble under Bas Wiegers, Tapiola Sinfonietta, NYKY Ensemble and gamUT Ensemble. He has also given lectures for composers about writing for accordion at Conservatoire de musique et d’art dramatique du Québec in Montreal and Manhattan School of Music in New York. Pulkki has also worked extensively with theatre and opera music and arranges music himself.

Pulkki graduated with a master’s degree in accordion performance from the Sibelius Academy of the University of the Arts Helsinki in 2017 as a student of professor Matti Rantanen. Pulkki has participated in several international master classes and seminars in accordion performance and new music such as Feriekurse für neue Musik in Darmstadt and Impuls Academy in Graz and has had the opportunity to study with many respected accordionists on masterclasses. The academic year 2014-2015 he studied in Toronto joining the studio of professor Joseph Macerollo at the University of Toronto.