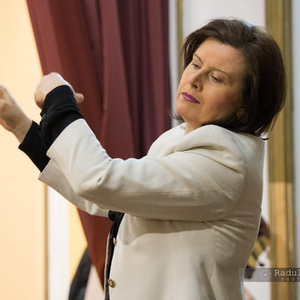 Maestra Milena Injac, DMA  is a Pricipal Guest Conductor of the Nis Symphony Orchestra, Nis, Serbia, since 1994. where she also acted as a Music Director from 1999 till 2003. She is Music Director of the Opera productions in the city of Nis National Theatre, as well as Chief Conductor of the City Chamber Orchestra Tsarina Theodora, Nis, Serbia.
Together with her concert career, she has built a successful academic career as a full time professor, Vice-Dean for Education and Chief Conductor of the Symphony and Chamber orchestra Concertante at Faculty of Arts, University of Nis acting also as a coordinator of the International Cooperation within the project Erasmus+, a s well as member of the Senate and president of the Arts Council at University of Nis, Serbia.
Maestra Injac is the winner of the First Prize at 3rd International festival ”World of music” in Italy, conducting the Niš Symphony Chamber Orchestra in 2000. In 2004, she is awarded with a „Golden Badge” of 20th International Choral Festival in Nis, Serbia for a high level of her vocal-instrumental performances. Milena Injac is the laureate of the Euroorchestra Festival in Moscow, Russia (2012).
Milena Injac graduated in Orchestra and Opera Conducting in 1992. at the Faculty of Music, University of Arts in Belgrade in the class of prof. Stanko Šepić. She obtained her MA degree in 1996, as well as her DMA degree of the orchestra and opera conducting in the class of professor emeritus Darinka Matić-Marović at the same Faculty. She has upgraded her skills at Universität für Мusik und darstellende Кunst in Vienna collaborated with maestro Salvador Mas Conde, as well as maestros Jorma Panula, , Peter Eotvos and well known Serbian conductors Mladen Jagušt and Angel Šurev.
Maestra Injac has performed with Belgrade Philharmonic, the National Theatre Opera in Belgrade, the Symphony Orchestra of Radio Television Serbia, the Symphony Orchestra “Stanislav Binički”, the Symphony Orchestra of Montenegro, the Philharmonic of Sarajevo, the Philharmonic of Macedonia, the Opera of Macedonian National Theatre, Savaria Symphony Orchestra (Hungary), the State Philharmonic of Plovdiv, Vidin, Shumen and Vraca in Bulgaria, St. Alban Symphony Orchestra in Great Britain, Musica Teatro Ensemble of Rome, as well as the Youth Orchestra Turina in Valencia, the Orchestra of the Conservatory of Oscar Espla in Alicante, Spain, the National Symphony and Philharmonic Youth Orchestras of El Salvador, National Symphonic youth Orchestras, Choir and Ballet Hose Artigas and SODRE in Montevideo,Uruguay. Milena Injac was appointed conductor of the International Symphony Orchestra of the 29th Orchestra Festival in Murcia, Spain in 2010 and International Symphony Orchestra at the Euroorchestra Festival in Moscow-Zukovsky, Russia in April, 2012.
Milena Injac has participated numerous international festivals like the International Review of Composers in Belgrade, Serbia, Bolshoi Festival of Emir Kusturica in Mokra Gora, Serbia, NIMUS festival in Nis, Serbia, as well as festivals in Sweden, Greece, Austria, Bulgaria, Italy, Spain, Uruguay, Turkey and Russia. She is often invited in juries of the international competitions of choirs and orchestras, as well as to lead master classes of conducting.
Maestra Milena Injac was born in Serbia, but her ancestors include also Czechs and Hungarians. This mixture of Balkans and European origin makes her very exciting conductor who adds new energy and fresh ideas to her performances bringing together East and West. www.maestramilenainjac.com 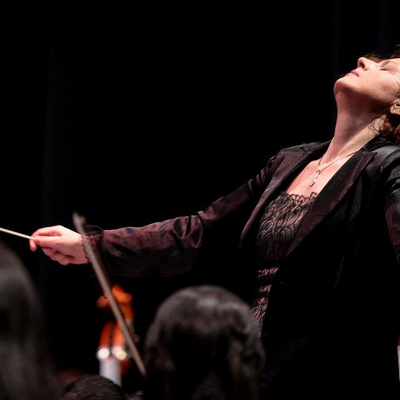