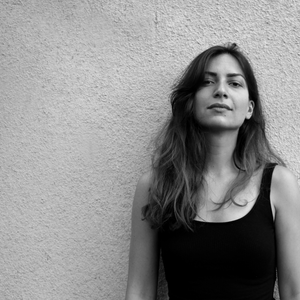 Mariam Gviniashvili is an Oslo-based composer and sound artist originally from the country of Georgia. She arrived at composition after voice and piano studies from early age. She composes acousmatic music, often for large speaker arrays. She has also created audiovisual media and interactive sound-art works.
During her tenure as a studio manager at the Tbilisi State Conservatoire, she completed Master’s studies in acoustic composition, 2 years of studio production studies at the Norwegian Academy of Music, and one year of electroacoustic music composition at the Liszt Academy of Music under Andrea Szigetvári. In 2018, she moved back to Norway where she is pursuing a Master’s degree in Music Performance Technology at the Norwegian Academy of Music under Natasha Barrett.
Mariam has worked in residence in the studios of EMS (Stockholm, Sweden), EMPAC (New York, US) and The Cube, Virginia Tech (Virginia, US). Her music has been presented internationally at concerts and festivals, including New-York Electroacoustic Music Festival, Venice Electroacoustic Rendez-Vous, 35th General Assembly of CIME/ICEM, Transitions concert series at CCRMA, ICMC 2018, Cube Fest 2019, and Ultima Oslo Contemporary Music Festival, among others.

PONTOS E LINHAS for oboe and percussion (2009) by Rodrigo LIMA