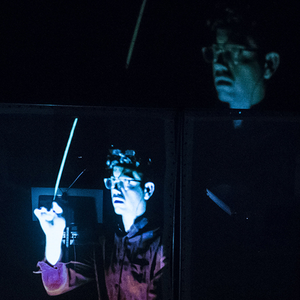 Heterodox percussionist interested in avant-garde art, new forms of communication as well as their implementation in the sound-musical creation of our time. Formed by Christian Dierstein and Fred Frith. He currently follows the advices of Håkon Stene.

His main projects are the duo reConvert project with Lorenzo Colombo or the recent y-band, where he proposes an aesthetic and conceptual review of the current panorama of musical creation. He is also the artistic co-director of the nomadic music platform CONTAINER. In addition he carries out an ongoing work with composers such as Simon Steen-Andersen, Michael Maierhof (among others); for the development of new repertoire that questions the established limits of percussion, included in his project [expandING_percussion], awarded with the Young Creation Award 2017 of INJUVE.