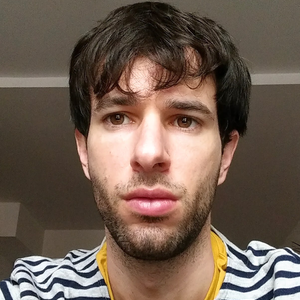 Works (1)
Main interests
Music with Electronics
Member since
May 31, 2022

Originally from Tel Aviv I began my academic studies with a Bachelor degree in Neuroscience and later continued to a PhD in Computational Biology and research of the Human Microbiome. In parallel I started studying music composition and later moved to The Netherlands to study electronic music in The Institute of Sonology. Focusing on the music of Karlheinz Stockhausen I acquired my Master's degree with an electronic music realization of his composition TIERKREIS. In 2017 I began training and working as a sound projectionist and synthesizer creator for the Aus LICHT production in Holland Festival 2019. Afterwards I decided to take a two-year hiatus from music in order the explore other facets of the human condition through yoga, anthroposophy and writing. Since 2021 I live in Falkensee, Germany.

My interests are broad and include music, art, literature, science, politics, philosophy and spirituality.